Lewisburg, Pa – White Deer’s Ross Drick might be getting older but he is getting longer too. His 319-yard drive Thursday evening was 9 yards longer than his 310-yard winning drive a year ago. He took home the Big Dog Prize in Long Drive Contest on the 15th tee at the Bucknell Golf Club. It was the fourth time the event has been held as a fundraiser for the Donald L Heiter Community Center in Lewisburg.

With the fifteenth tee holding three sets of bleachers, a fair crowd gathered to watch 8 of the longest hitters in the area square off. 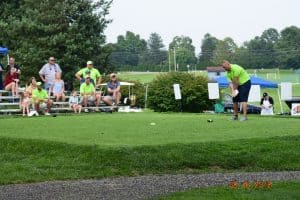 In the semi-final round, this time only hitting 5 balls, it was Drick, who is employed at the Lewisburg prison and Knauth, a first-year student at Carnegie Mellon who advanced to the final round when Drick’s 302-yard blast again topped the field while Knauth registered 288 yards and then squared off in the finals. Cooley only got one in play at 256 yards and Kline’s best was 277.

Drick and Knauth have won four White Deer Club Championship between them. A coin toss determined who went first and it was Knauth who chose to go first. This time the finalists had only 4 balls to hit and Knauth got two of the four in play, his best was 285 yards. Drick’s first attempt in the final round was 318 yards and that clinched the title.

Drick took home a $500.00 VISA Gift card and Knauth and Kline (Senior winner) each got $250.00. Lewisburg’s Kline won the Big Dog Grand Prize for raising the most money for the Heiter Center, a total of $1691.50. Each of the contestants had to secure pledges as sponsorships and Kline’s efforts got him and his family a week in North Myrtle Beach at a 4-bedroom, 4 bath Ocean View Condo.

The contestants raised over $8000.00 in pledges and when combined with sponsorships from businesses and individuals, the Heiter Center raised just over $17,000.

The Donald L Heiter Community Center in Lewisburg was named after a former Lewisburg Chief of Police. They conduct after school programs and summer day camp for kids and a variety of community services that last year served over 4500 individuals from the surrounding area.

We rely on the help of our community to sustain our excellence and secure our future. The majority of our funding comes from generous donors like you.